Following on from last weeks brief over on the potential of Twitter and blogging for journalism, this week I am going to do a small demo of few video apps etc. So preparing for it for the lecture on Friday and for the 10 minutes I’ll have, I decided to capture few videos with the apps I was going to demo in class.

This morning on my way to the usual coffee place Remedy Coffee, I decided to do a timelapse of my walk from our office on 56 Wakefield Street.


I created this timelapse using the Hyperlapse app available for the iPhone (Download Link iOS only). An alternative for Android uses since Hyperlapse is only available for iOS is Lapse (Download link Android only).  I later imported the timelapse videos from my camera roll into the YouTube Capture App to edit and add background music. Note: None of these videos were edit etc on a desktop. Entirely shot, edited and uploaded from my phone.

While at Remedy Coffee suddenly the traffic came to a halt and couple of Police offices started controlling the signal. We suspected that it was in preparation of the UoA graduation ceremony. I have witnessed the traffic control police offices in action before and always found the gestures they made funny. So, I decided to timelapse this as well. Again, using the same app as above, however, this time the traffic offices were a bit of a letdown. They seemed confused and some of the gestures that made were not the same as I had witnessed before. Anyway, here is their attempt.

Between our coffee got delivered and having taken a few sip, out came a big for random people holding flags and banner saying ‘Stop oil drilling”. Out of the blue and totally random, a news event was unfolding before my eyes. And it played right into what I was trying to demo to the students. Events unfold unexpectedly most of the times when you are least prepared. I pulled out my phone (as you do) and this time used the YouTube Capture app to capture the event as it unfolded.

Of course couple of tweets went out after I had uploaded the video onto YouTube.

Other tweets from those who were present at the time reported the event.

Anti-oil protesters on Queen Street… mixing it up amongst the hundreds of Auckland Uni graduates. pic.twitter.com/g3mQc5filG

Later reported in the Herald at 1.56pm: http://www.nzherald.co.nz/nz/news/article.cfm?c_id=1&objectid=11334028 almost about 30 minutes late to when my videos were uploaded.

PS: I am not a journalist. I am simply sharing how this event unfolded before me unexpectedly. And how having the knowledge of some basic apps allowed me to capture, edit and share the news through mobile social media.

Here is an example of Vine (Twitter for video). Vine allows 6 seconds of video recording. You can pause and record as many times as you want to compose a single video.

Find out more about Vine: https://vine.co

To embed a Vine video to your blog post on WordPress, use add media -> URL and paste the URL. The Vine video should embed by default. To find out more, refer to this website: http://en.support.wordpress.com/videos/vine/ 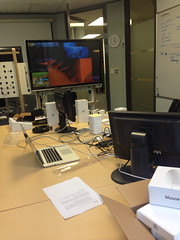 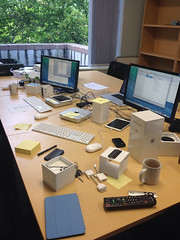 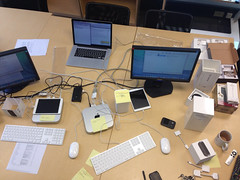